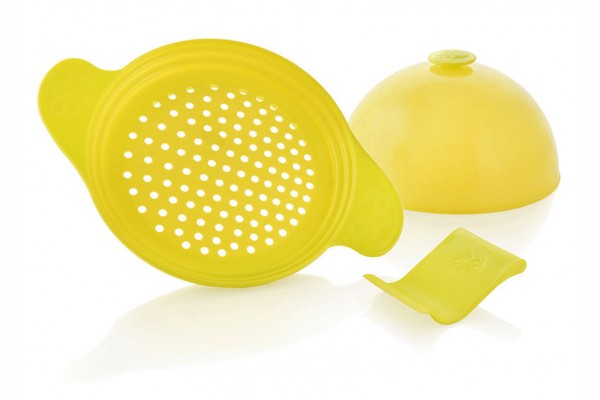 Using the steam cooking hood you can turn the Muxel's Spätzle Wonder into a steam cooker for crispy and vitamin-rich vegetables.

Steam cooking stands for no-fat and low-salt preparation of vegetables, fish and meat

You can also use Muxel's Spätzle Wonder to protect against water boiling over, or as a pouring aid for liquids or for defrosting.

Muxel's Spätzle Wonder Set helps you to prepare delicious variants of Swabian noodles in a flash, be it the traditional way or spicy, with tomatoes or spinach, or sweet, with quark.
Just scrape the Swabian noodles dough using the special, patented dough scraper through the holes; with the round side to make the long noodles (in Swabia called "Spätzle") and with the edge to make the short noodles (in Swabia called "Knöpfle" =little buttons).
You can use the special Swabian noodles board (a board flattened in the front) also to protect yourself against boiling over or splashing of boiling liquids or as a pouring aid, or as substitute for a strainer.

The best of Muxel's Spätzle Wonder Set is the steam cooking hood, which you simply place over the special Swabian noodles board to turn it into a steam cooker.

The taste of steam-cooked food is unmatched and is very healthy because you cut-down on fat and salt, and do not cook valuable vitamins and minerals to death. The dishes retain their natural, original taste, colours and consistency; the vegetables remain crispy, the fish and dumplings do not disintegrate and the meat becomes wonderfully tender. You save time and money by cooking noodles, rice or potatoes in a pot and cooking the other ingredients directly above them, in the rising steam.
The dome-shaped hood is high enough to cover an entire cauliflower. Muxel's Spätzle Wonder Set is also suitable for warming up, keeping warm and defrosting food. It consists of a special board for Swabian noodles, a patented dough scraper, the steam cooking hood, handling instructions and a recipe book with delicious recipes. It fits on all pots of 20 to 28 cm diameter; it is heat resistant, can withstand up to 170 degrees and is dishwasher-safe. So, there's no risk in ordering Muxel's Spätzle Wonder.