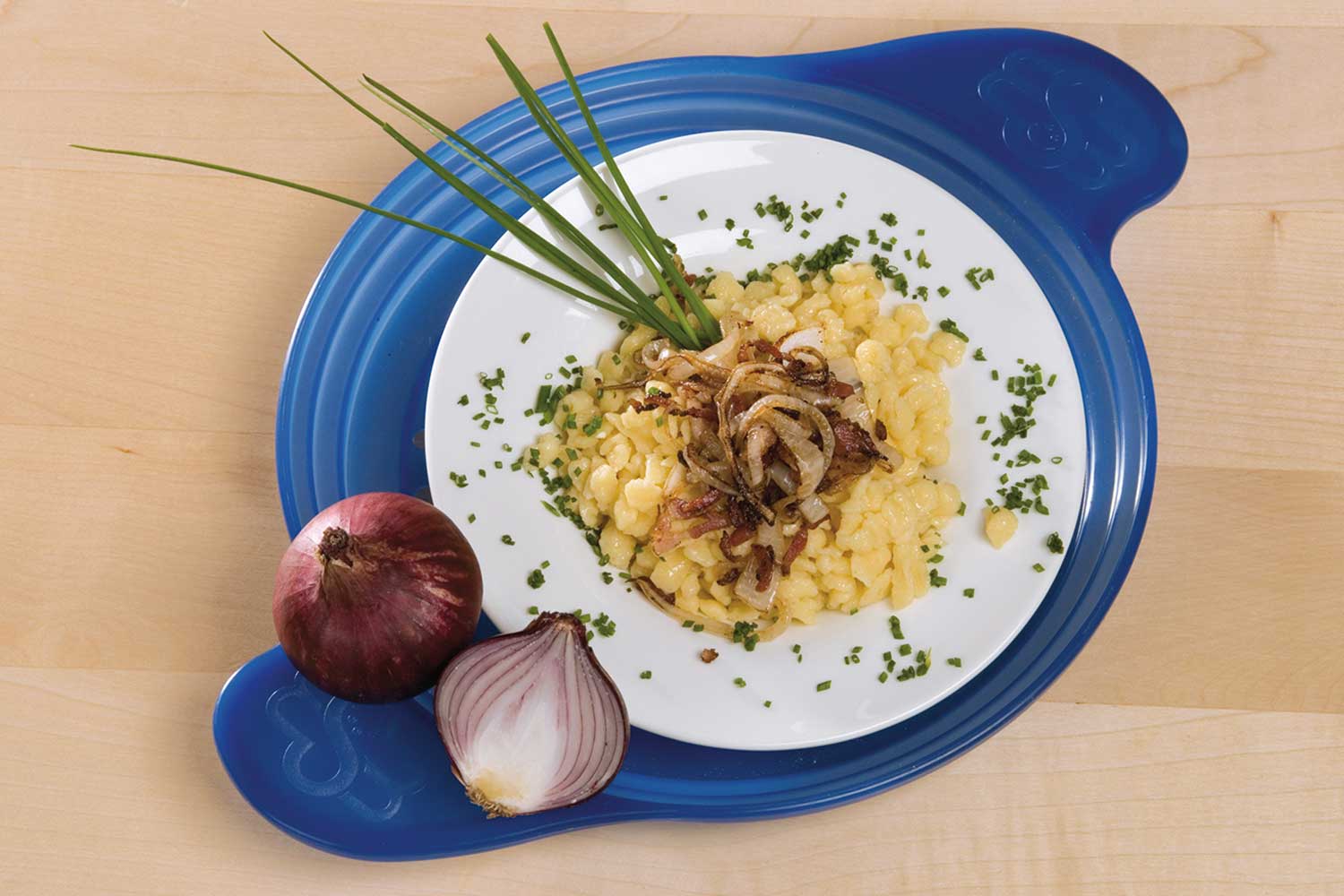 the delicious temptation from the Spätzleland, or how to cook Käsespätzle?

The recipe is simple, the ingredients almost always in the house, that might also have been the reason for the invention and spread of homemade Käsespätzle.
Whether the Swabian now say was not stingy, but rather economical, or just poor, we do not want to discuss at this point. But one thing is certain: Spätzle with Käse taste, make you full and do not cost much.

Recipes for Käsespätzle today there are many recipes for Kätzle for so many flavours that there is really the right variation for everyone.

Whether you want to enjoy your Spätzle now with bacon, preferably vegetarian or even vegan is up to you. Käsespätzle always taste good, no matter which way. 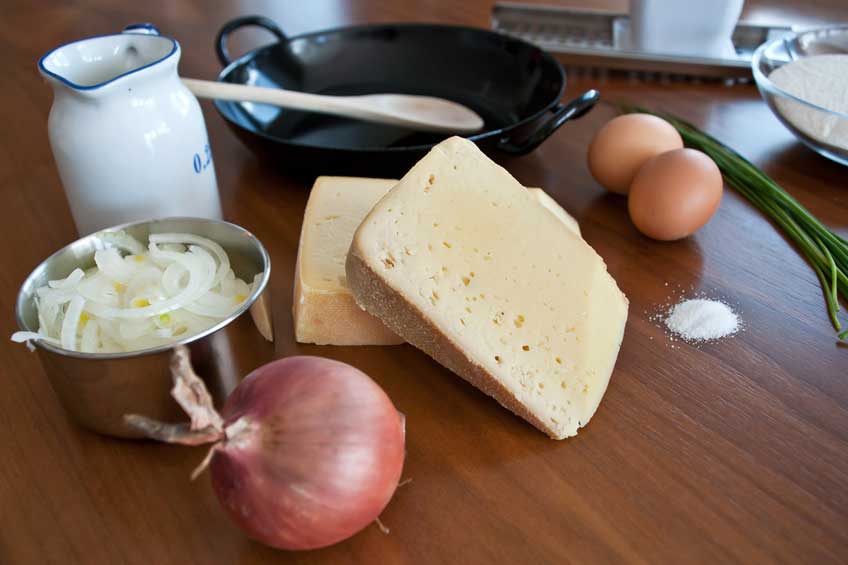 bring pot to boil with approx. 4 - 5 lt of water in it. in the meantime prepare dough according to basic recipe. The Käse best freshly grate, tastes better. Cut the onions into rings about 3 mm thick. Put plenty of butter in a pan, heat up; sprinkle the onions with flour and then slowly sauté in the hot butter until the delicious onions are in the pan.Warm the porcelain husk and then scrape the first third of the dough through the miracle spoon into the slightly chilling salted water. As soon as the spätzle then floats up, pour it into the pre-warmed bowl and sprinkle a third of the water over it. Repeat the procedure three times. Finally, place the fried onion on top. Ready
So fast is cooked, tastes good and koshes ned much.

Approximate nutritional values for a portion of cheese spaetzle. Of course, it always depends on the cheese. Emmentaler or mountain cheese is often used for Swabian Spätzle.

What are cheese noodles? And where do they come from?

The answer to these questions is particularly difficult because there are no really satisfying answers either here on the net or in Büchern.
Spätzle should have been around for quite some time, but at first they were mentioned in the schwätzle Göppingen, but about Käsespätzle there is nothing at all to find. They were suddenly there somehow.
The assumption is obvious that they were not "invented" by the Allgäuers as is often claimed, but rather by the Swabians.
In between the 17th and 19th centuries many young people from the even poorer Vorarlberg went to Swabia as seasonal workers. These Swabian children, as they were called, may have brought the recipe to Allgäu, Vorarlberg and Switzerland.
Presumably, due to a lack of the right equipment, the long spouts there became the short spops, spats, knops, and spops.
Möglich is also that the short Knöpfle were always already in the universe, coming from Südtirol. From there they came to the Swabians and came back as Käsespätzle. Unfortunately, no one really knows.
Fest stands, Käsespätzle taste excellent, are very nutritious so ideal for hard working mountain farmers.
No matter who invented them now, Käsespätzle and especially "Allgäuer Käspätzle" are a worldwide known specialty today.

Recipes: The whole diversity of Käsespätzle

Recipes for the Käsespätzle there are many, but the recipes for the dough are uniform. Differences exist partly in the consistency of the dough and in the shape of the spätzle, which can vary greatly in appearance and size. Greater regional differences are more likely to be found in the types of crop used. 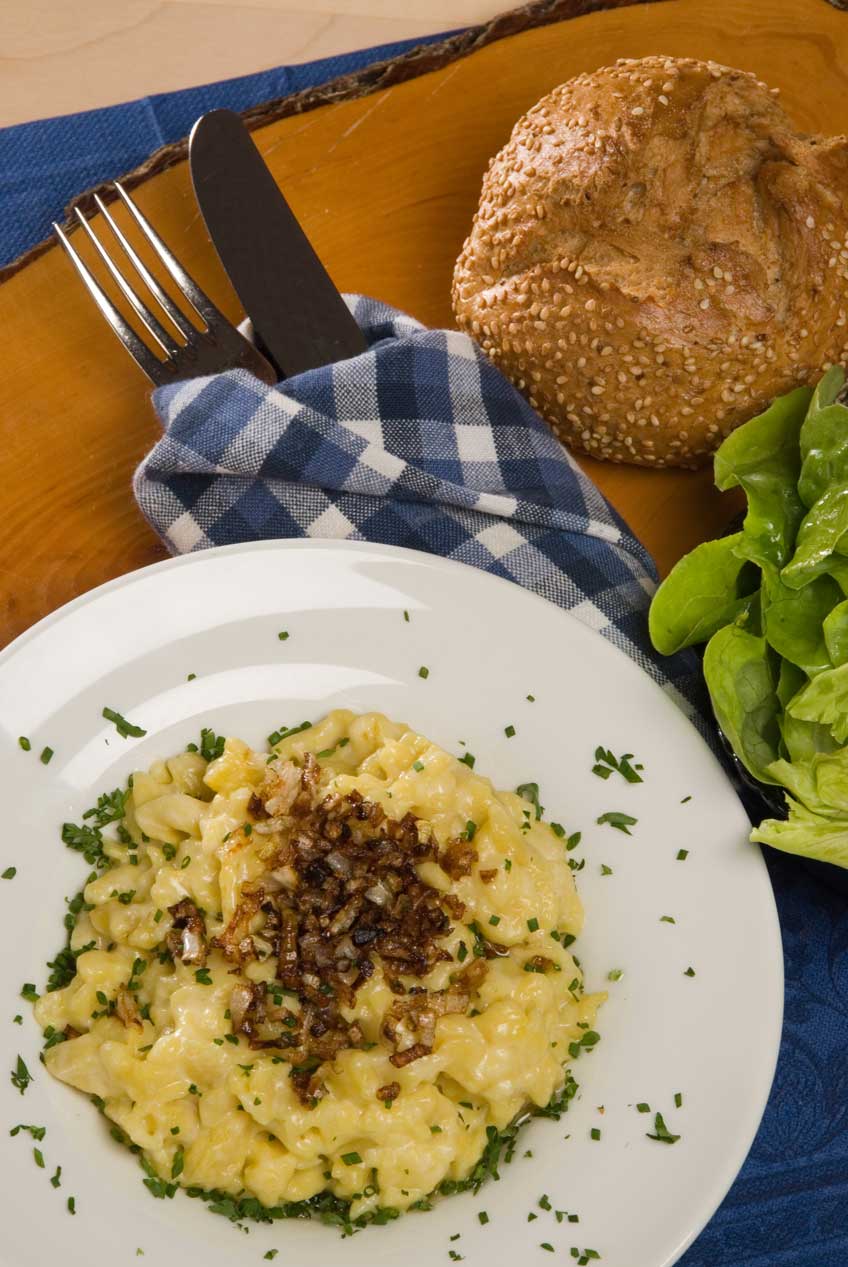 The fame and popularity of the Allgäuer Käsespätzle may come from skiing. This alpine classic is practically on the menu of all alpine huts.
After such a strenuous day on the slopes, finally arriving in the warm parlour, Käspätzle simply taste gigantic. Who doesn't get the idea to cook the holiday on his plate in his own home kitchen?
It is clear that Allgäuer Käsespätzle naturally belongs to real Allgäuer Bergkäse. But the Allgäuer also mixes white lacquer cuticles with it. In addition, there are also very fine slices of Romadur or Stinkkäse as my grandmother has already called him. To the general public belongs green salad and of course a glass of beer.
In many places these delicious Käsespätzle from the Allgäu are also served to roast onions.
In Allgäu there is swish correct but no Spätzle at all but Knöpfle, so the small roundish variant of the Spätzle. 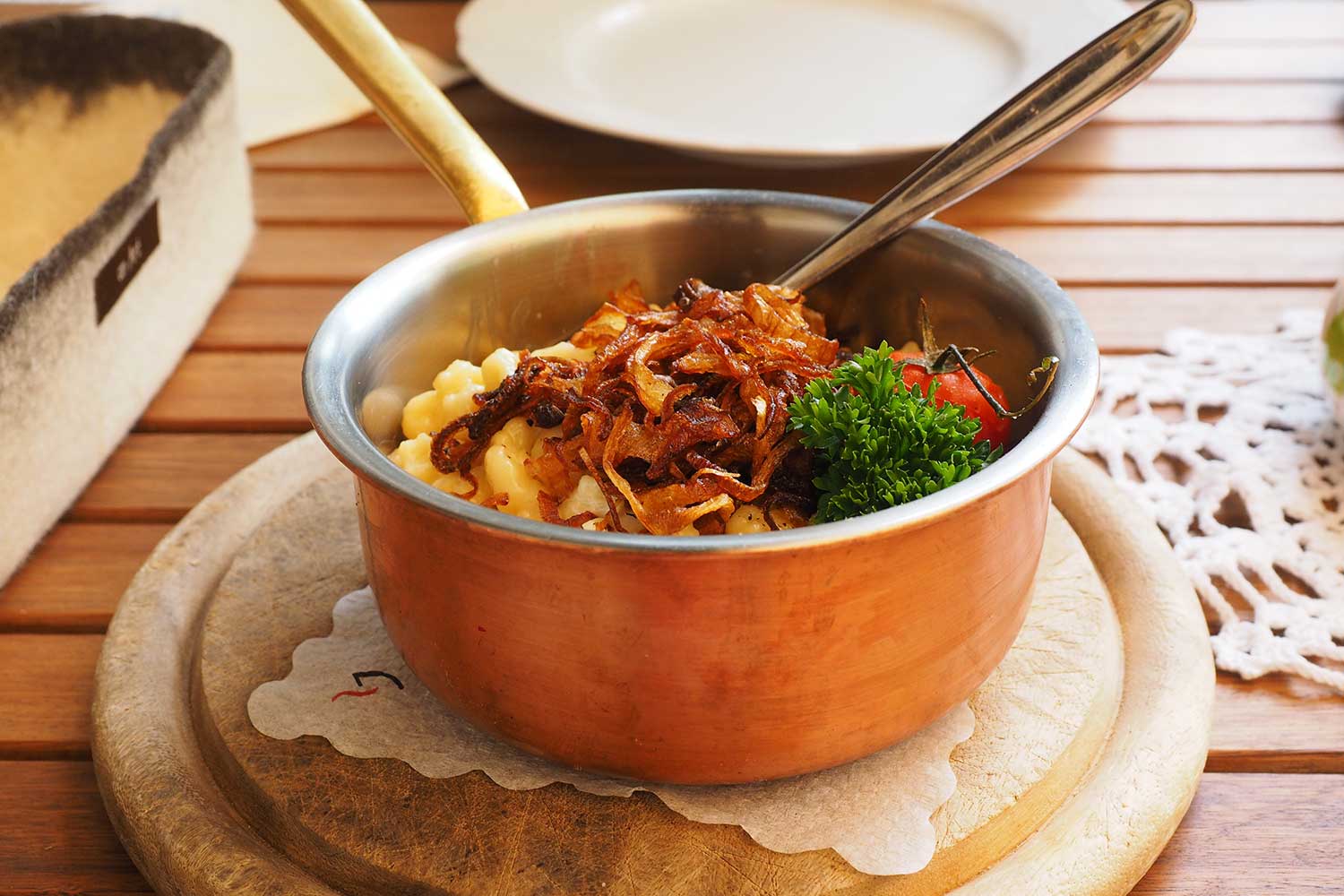 In Vorarlberg they are called Käsknöpfle, then Kasnocken in the direction of Salzburg and then Nockerl in the direction of Vienna.
Die Käsespätzle are already really thick and big and remind of Hungarian Nokedli (Spätzle in Hungary), unlike Vorarlberg, where the Spätzle must be very small and round.
Vorarlberg has another special feature: in contrast to Swabia, the Spätzle dough should only be "stirred" very slightly and the flour and eggs should still be partially recognizable.
In Vorarlberg, the western mountain is äsimilar to the Allgäer naturally preferred. In Austria, there is, not like in Germany, a Süd - Nord Gefälle eating Käsespätzle, here they are eaten all over the country. 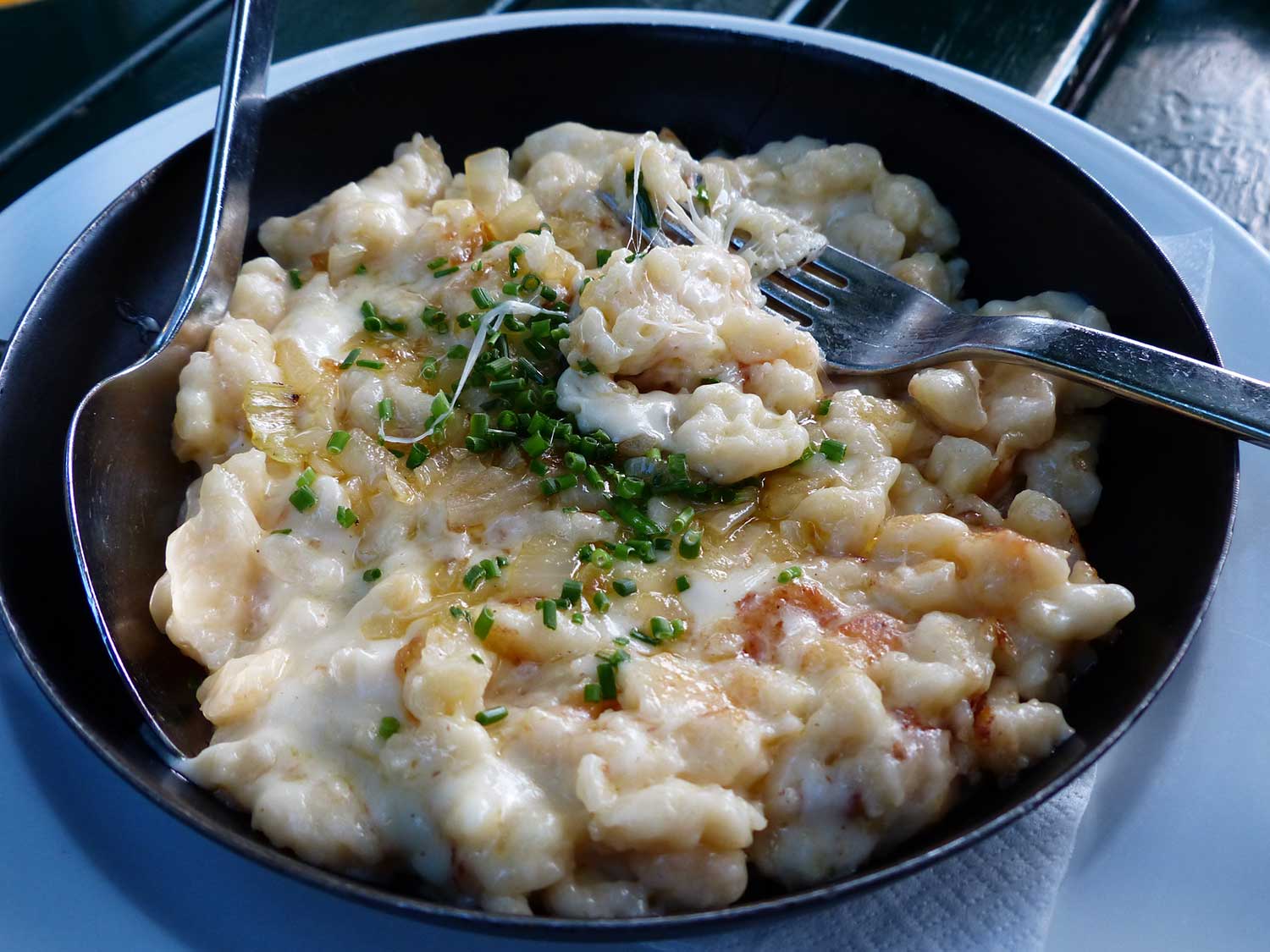 In Switzerland it can happen that you are served applesauce as a side dish to your Chäs-Chnöpfle. In the same way beans are mixed with the Käsespätzle and then baked. Just trying it is something completely different.
In Walgau and in the Rhine Valley, the Chäs Chnöpfli are often made with sauerkäse a speciality that you will rarely find in Germany.
Yes and then there's the Bärlauchzeit, when you travel through Switzerland you'll stumble over Bärlauchspätzle with and without your body, and they taste really great.

Käsespätzle: What all variations have in common is that they are incredibly tasty and nutritious. In addition, the recipes are so easy to recook that you can do without your cookbook within the shortest possible time. During production, make sure you produce the Spätzle yourself - for example with our alternative to the Spätzlebrett, which makes the Spätzle wonderfully simple. Or traditionally with Spätzle plane or Spätzle press. It is also important that you use good onions and how you cut the onions: Only if the onions are not too thick or cut too thin, can they become onions that are particularly tasty and add their sweet aroma to the delicious Emmental, Bergkäse & Co. aroma.
Do you like it when the Käsespätzle become particularly juicy? You can add some cream to the grated Käse. If you then layer the Spätzle with the mixture of Käse and cream, the result is a dish that is as creamy as it is delicious!

Do you have any questions? Do you find only Spätzle recipes with pepper and salt in your cookbook and wish you had some unusual ideas or even Spätzle with exotic ingredients? Visit our blog for more information! There you will find classic and exotic dishes, Spätzle sützig; and Spätzle salty, Spätzle as a main course or as a side dish and and and and...Have fun cooking!